The Myth of “Money the Government Owes Itself”

The Debt-to-Income Ratio (or DTI) is a standard way to measure the burden of debt that every citizen and consumer should understand. Investopedia describes the term as “a personal finance measure that compares an individual’s debt payment to his or her overall income. The debt-to-income ratio is one way lenders, including mortgage lenders, measure an individual’s ability to manage monthly payment and repay debts. DTI is calculated by dividing total recurring monthly debt by gross monthly income, and it is expressed as a percentage.”

For governments, the Debt-to-Income ratio is no different, except that here the burden of national debt uses Gross Domestic Product (GDP) to represent the national income.

So if we were to calculate the National Debt-to-Income Ratio for the U.S. government, which of the following possible answers do you suppose would be the correct figure to describe the national debt burden for the first quarter of 2018, where the U.S. GDP was recorded to be $19,960.1 billion and the total public debt outstanding of the U.S. government was $21,089.6 billion?

Clearly, if you use the values we provided for the U.S. national debt and GDP, the correct answer is A. However, if you go by the Congressional Budget Office (CBO), the answer would be B. Here’s how Jeff Stein of the Washington Post reported it:

By the end of this year, the ratio of federal debt to the United States’ gross domestic product will reach 78 percent, according to the CBO, the highest ratio since 1950.

The debt is projected to grow to 96 percent of GDP by 2028 before eventually surpassing the historical high of 106 percent it reached in 1946.

Except that the CBO’s own analysis of the U.S. government’s Long-Term Budget Outlook and its 10-year Budget and Economic Outlook for 2018 confirms that it isn’t.

That’s mainly because of the pending depletion of Social Security’s trust funds, which the CBO’s analysts predict will happen after 2031. Because much of the intragovernmental portion of the national debt is made up of IOUs that the government wrote to itself as it “borrowed” money from Social Security’s trust funds to sustain its spending at levels in excess of the revenues that it has had, and because the CBO doesn’t believe that the U.S. government will ever be capable of collecting enough revenue to cover the full cost of what U.S. politicians will spend, much of this “intragovernmental” portion of the U.S. national debt will be transformed into “Debt Held by the Public” over the next 15 years. 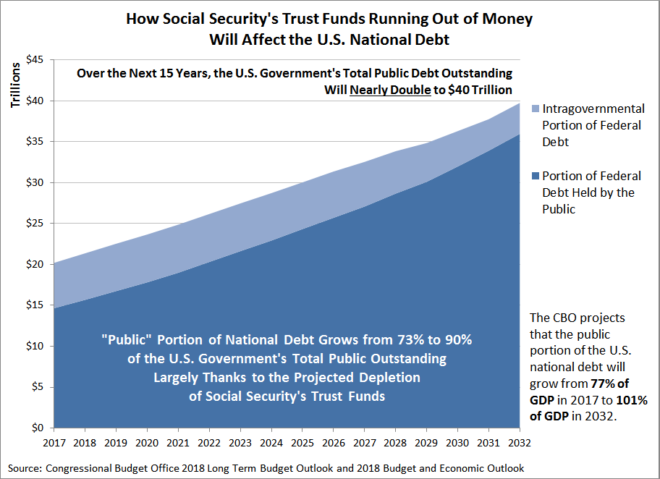 We can see that in the above chart as the percentage of Public Debt Held by the Public grows from 73 percent of the U.S. government’s Total Public Debt Outstanding in 2017 to 90 percent over the next 15 years. At the same time, the CBO projections suggest that the total national debt will nearly double from $20 trillion in 2017 to $40 trillion in 2032.

The CBO’s projected transformation of so much of the U.S. government’s “Intragovernmental” Debt into “Debt Held by the Public” reveals that the money that the government owes to itself is little more than an accounting farce. It’s one aimed at purposefully understating the true magnitude of the U.S. government’s debt burden today because it ignores how the government will need to obtain the money that it will use to pay off much of its accumulated intragovernmental debt burden.

Such is the myth of the money that the government owes itself.

Craig Eyermann is a Research Fellow at the Independent Institute, Managing Director of Political Calculations, and the creator of the Government Cost Calculator at MyGovCost.org.
Posts by Craig Eyermann
Comments
Before posting, please read our Comment Policy.