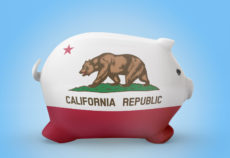 The surging national economy has given California a budget surplus by some accounts of more than $5 billion, with tax collections up about $3.8 billion above what Governor Jerry Brown anticipated in January. California taxpayers should not expect Brown to return any money to the taxpayers, in the style of governor George Deukmejian, who passed away on May 8. As he said back in 1987, “I think we can be very pleased that we were able to protect this money for the taxpayers and that we have honored the spending limit enacted by the voters through the initiative process.”  Outgoing governor Brown has other plans.

He wants to give state prison guards their biggest raise since the recession, a 9.3 percent hike over three years that will cost $114.6 million in the budget year that begins July 1 and $331 million over the next two years. The pact also allows the guards to cash out up to 80 hours of accrued vacation time. Other sweetheart deals are surely set in store, and taxpayers might recall the back story.

On his first watch as governor, Brown made it a priority to expand collective bargaining for government employees. These unions implement government policy and function as a kind of “deep state” that remains in place, whatever the administration. So politicians tend to give the government employee unions what they want.  On Brown’s second watch, the Service Employees International Union demonstrates outside the capitol chanting “this is our house!” That is in fact the case, and the governor has sweetened the deal. He backs measures to boost funding for low-income students and English learners, then under his principle of “subsidiarity,” lets the various districts spend the money on bureaucracy. For example, in 2014 the massive Los Angeles Unified School District gave principals and administrators a pay raise of 6.64 percent, adding a lump-sum bonus equal to 2 percent of salary. And all this comes apart from any hike in student achievement or accountability.

Whatever happens with the Delta tunnels or the bullet-train, Jerry Brown’s legacy is a state where deep-state drones are number one.