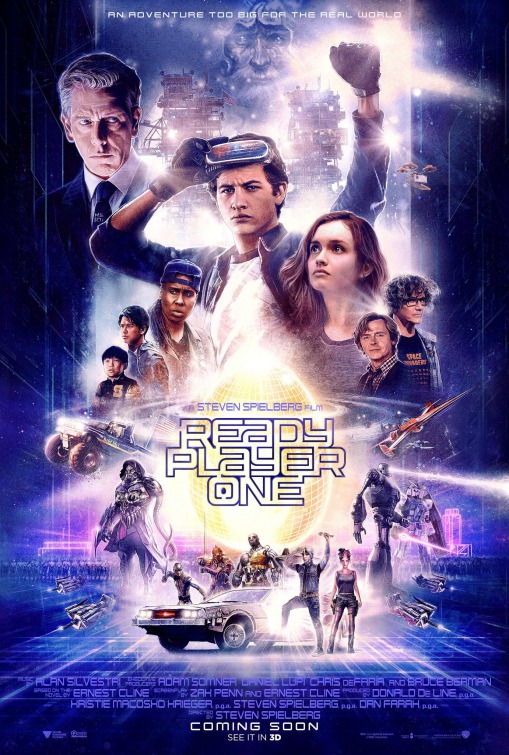 Ready Player One seems destined to become another Steven Spielberg classic, serving up a movie that appeals to a wide range of audiences with a solid story, well-crafted characters and engaging adventure from beginning to end. Along the way, viewers also get a good dose of ethics, with an emphasis on empowering the individual over a centralized authority.

Based on co-screenwriter Ernest Cline’s original novel of the same name, Ready Player One takes place in Columbus, Ohio in a dystopian near future (2045). (Columbus seems to be getting a lot of play in dystopia these days; see Tracy Lawson’s very libertarian sci-fi Counteract action series of young adult novels.) The world is ravaged by overpopulation. Unemployment and underemployment are widespread. Mobile homes are built on top of each other, creating vertical slums called “stacks.” The imagery is striking, creating desolate landscape that anyone would want to escape. Audiences are immediately drawn into a video gaming aesthetic that complements the plot.

In order to escape their bleak existence, most citizens living in the stacks spend their days and evenings in a virtual reality world called OASIS (Ontologically Anthropocentric Sensory Immersive Simulation) where they can play out their personal fantasies.

OASIS was developed by James Halliday (Mark Rylance, Bridge of Spies, Dunkirk, The BFG) as a Massive Mutliplayer Online Role Playing Game (MMORPG). Before Halliday unexpectedly passed away, he set up Anorak’s Quest, a hidden game in OASIS. Anorak’s Quest contains an unimaginable reward for the winner: complete control of the game and the company he founded to run it. The reward, symbolized by a giant glowing Easter egg, is worth billions of dollars to the winner. The size and magnitude of the reward sets off a massive, global scramble to find the egg, creating legions of egg hunters called Gunters.

Halliday builds Anorak’s Quest around a continuum of pop-culture iconography, including references from the 1970s and 1980s such as Duran, Duran, the Stephen King horror book The Shining, the disco dance craze, and online fantasy games such as World of Warcraft. The pop culture symbols come fast and furious, making it almost impossible for viewers to inventory them in one showing. The volume of the images can be distracting to viewers, but they also serve the purposes of heightening the sense of confusion experienced by the players. The images are not gratuitous either. They serve the story and plot by visually showing the complexity of the quest and the importance of knowing more than what appears on the surface. This becomes a critical plot point for the movie’s climax.

The principal protagonist is Wade Watts (Tye Sheridan, X-Men: Apocalypse, The Stanford Prison Experiment, Mud), an orphaned teenage Gunter living in the stacks with his aunt and her abusive boyfriend hundreds of feet in the air. Wade spends his waking hours researching Halliday’s life in an increasingly desperate attempt to escape his life. Like actual gamers playing MMORPG’s, Wade builds a team, the “High Five,” by befriending other players via their avatars. The team consists of the large, hulking male avatar Aech (Lena Waithe, Master of None, Dear White People, Step Sisters) who is also a mechanical whiz, two ninjas and weapons experts, Sho (Philip Zhao) and Toshiro (Japanese/Burmese actor Win Morisaki). Wade leads through his adept use of strategy and knowledge of Halliday. The most skilled player, however, is a girl with the game name Ar3emis (Olivia Cooke, Katie Says Goodbye, Me and Earl and the Dying Girl, Ruby’s Skin). Wade falls for Ar3emis, complicating the quest, but also setting up a critical tension between reality and fantasy.

The stakes are high, however, attracting more than just kids. Halliday’s primary competitor, Innovative Online Industries (IOI), run by the ruthless CEO Nolan Sarento (Ben Mendelsohn, Darkest Hour, Rogue One: A Star Wars Story, Mississippi Grind), has hired his own legion of players to find the keys and seize control of the game and the wealth it creates. When Wade beats the first level and wins the first key, Sarento puts him in the cross hairs. Sarento first tries to buy Wade by promising him a well-paying job at IOI. But Ar3emis sows enough skepticism about IOI that Wade turns down the deal.

Sarento, however, is under pressure from his board of directors to win. He quickly defaults to more brutal measures, including hiring bounty hunter i-R0k (T.J. Miller, Cloverfield, Deadpool, Transformers: Age of Extinction) and tasking IOI’s operations head F’Nale Zandor (Hannah John-Kamen, Tomb Raider, Star Wars: The Force Awakens, Game of Thrones) to kill him.

Ready Player One’s themes are rich and textured, and particularly relevant to current controversies over data, privacy, and the social impacts of online gaming. IOI is a giant company with massive social, political, and economic clout. This influence seems to allow it to operate outside the law as a rogue tech oligarch. The movie provides running social commentary on the ways video games can “take over” people’s lives while allowing the companies themselves to operate without scrutiny or external discipline. Those who can’t pay their debt to IOI, for example, are sent to “loyalty centers,” the tech analogue to debters prison. But the loyalty centers are real. Former players work off their debt as slaves to the company by helping Sarento win the game with new avatars. Sarento uses a virtual army of indebted former players as these modern-day indentured servants advance IOI in the game.

A more important theme examines questions of identity and authenticity. Avatars, Wade is reminded by Ar3mis, are not their true selves, but a projection of personal fantasies. Ready Player One has the characters jumping into and out of the game, forcing the characters to confront their personal limits as well as the real meaning that drives their personal aspirations. As the movie progresses, the online gaming technology becomes a tool for offense and defense, blurring the lines between reality and fantasy. Not surprisingly, another storyline explores how the differences between fantasy and reality change the relationships among the players and Watts’s team.

Alas, Ready Player One has a few significant flaws. For example, Wade and Ar3emis access Sarento’s IOI avatar at a key point in the movie. The way they gain access, however, would require an extraordinary level of naivete for a seasoned, calculating CEO of a major conglomerate. The movie also does a poor job of showing the interface between real-world social and government institutions and their analogues in the gaming world, leaving audiences to scratch their heads late in the movie when the real-world police show up to arrest IOI bad guys.

Despite its flaws, the action, adventure, feel-good ending, and socially relevant themes are likely to elevate Ready Player One to yet another durable classic in the Spielberg canon of films. In many ways, Ready Player One is a return to Spielberg’s roots directing movies such as Close Encounters of the Third Kind, Raiders of the Lost Ark, and E.T. These movies used tightly written screenplays, stories that appeal to a wide range of audiences, and performances that elevate the careers of very capable but relatively unknown actors and actresses to keep audiences engaged. Ready Player Ones carries just enough weight to entertain adults while connecting with teens through its relevance and fantasy.

Samuel R. Staley is a Research Fellow at the Independent Institute and Managing Director of the DeVoe L. Moore Center in the College of Social Sciences at Florida State University. He is a contributing author to the Independent books, Property Rights: Eminent Domain and Regulatory Takings Re-Examined and Housing America: Building Out of a Crisis.
Full Biography
Posts by Sam Staley
Dystopia dystopian movies movie review Ready Player One Steven Spielberg Video Games
Comments
Before posting, please read our Comment Policy.