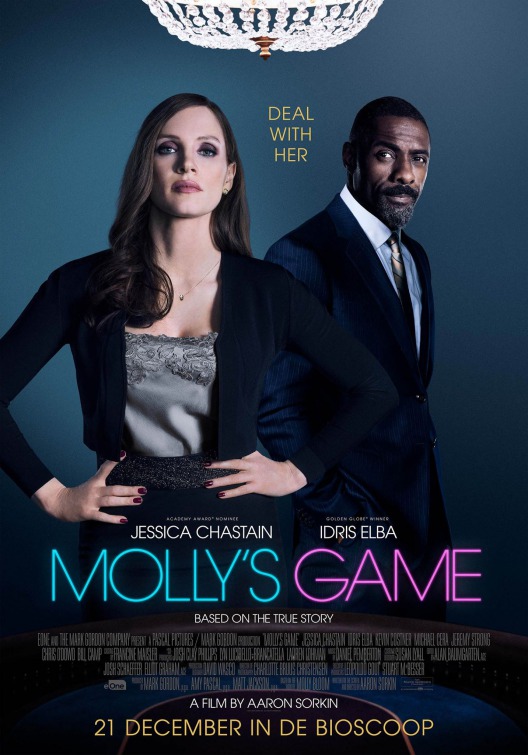 Molly’s Game, the new film with a snappy, Oscar-nominated screenplay by Aaron Sorkin (of West Wing and The Social Network fame), practically bubbles over with pro-liberty themes, from the irreverent lead character striking out on her own in an ethically suspect underground economy to the prosecutorial abuse used to coerce “Hollywood poker princess” Molly Bloom into confessing to crimes she did not commit. Based on a true story, the movie appears to be a faithful adaptation of Bloom’s memoir, Molly’s Game: From Hollywood’s Elite to Wall Street’s Billionaire Boys Club, My High-Stakes Adventure in the World of Underground Poker. In the hands of Sorkin, who also directs the film, Molly’s Game is engaging, entertaining, and a provocative indictment of the criminal-justice system as well as a coming of age story of a twenty-something.

Molly Bloom (Jessica Chastain, Zero-Dark Thirty, Miss Sloane, The Zookeeper’s Wife) was a competitive freestyle skier, ranking third in North America and a US Olympic hopeful. In the movie, Bloom has a career-ending injury that prompts her to leave Colorado and start a new life in Los Angeles and away from her domineering and verbally abusive father, Larry (Kevin Costner, Dances With Wolves, Bull Durham, Hidden Figures). She begins working for Dean Keith (Jeremy Strong, Zero Dark Thirty, The Big Short, Lincoln), a real-estate agent, who has connections to a high-stakes underground poker game. He coerces her into assisting him in managing the game. She is paid on tips, rather than wages, allowing Keith to skirt labor laws as well as keep the game underground. When Keith realizes she is making a lot money from tips, he caps her take and threatens to fire her if she objects.

Molly, however, is learning the game and bonding with the players, combining her astute observations of human behavior with her good looks to disarm the high-rollers at the table. When Keith finally fires her, she leverages her friendship with Player X (Michael Cera, Juno, Scott Pilgrim vs. the World) to start her own game, out maneuvering Keith. She builds her own clientele to be one of the biggest games in Los Angeles. The game, however, comes to an end when Player X turns on her as well.

But Molly’s game is not over. She is now addicted to the money, identity, and power that comes with running an underground gambling operation with the Big Boys (and they are all men). Molly picks up and moves to New York City, where she starts up an even bigger game with Wall Street bankers and investment brokers. Her life spins downward as she gets in way over her head–becoming the game’s bank for her billionaire clients–and self medicates through drug abuse. Eventually, she is pulled into an even darker side of underground gaming when the Russian mob tries to elbow its way into her operation through extortion. When she refuses, well, the mob does what the mob does (and that particular event in the movie is apparently true).

Meanwhile, Molly’s on the FBI’s watch list. They bust Bloom’s game and its players, arresting her on dozens of charges involving illegal gambling, money laundering, and racketing. She insists on her innocence (although the circumstantial evidence certainly is stacked against her), and finally convinces high-profile defense attorney Charlie Jaffey (Idris Elba, Mandela: Long Walk to Freedom, Thor: Ragnarak, Star Trek Beyond) to represent her. The skeptical Jaffey (a fictional character) ends up becoming Bloom’s staunchest defender by the end of the movie.

As in most Sorkin scripts, Molly’s Game has many layers. He uses the unusual technique of having Molly narrate most of the movie. This useful device allows for the story to be told largely in flashback while creating tension with the no-nonsense Jaffey. Aside from the conflict between Bloom and Jaffey, the narration/flashback structure serves two other important roles. First, audiences see Molly evolve from a brash, arrogant, determined, Type-A athlete to a more humble and circumspect women who has been tamed by the cruel and violent world of underground gambling. She goes from bratty teenager to an adult with faults that are real and relatable. Second, audiences come to appreciate Molly’s personal journey through Jaffey’s skepticism, and then empathy. Just as Bloom appears to be at her lowest point, resolved to go to prison for decades because she won’t give up her clients, Jaffey is able to provide the support she needs because of his sincere belief in her innocence.

The plot line that ties the movie together is prosecutorial abuse–deliberately overcharging defendants in an effort to secure a conviction by confessing to lesser crimes or, as in Molly’s Game, part of a larger strategy to convict the person they really want. New York prosecutors arrested Bloom (and many others) and levied dozens of charges against her in a ploy to coerce her into giving up the Russian mob figures they really wanted.

Notably, in the real case, as in the movie, the judge ended up reducing Bloom’s sentence to well below the time recommended by prosecutors. She could have gone to prison for decades and forced to pay a million-dollar fine. Instead, the court sentenced her to one year of probation, a $1,000 fine, and 200 hours of community service after she pleaded to lesser charges. Molly’s steadfast unwillingness to bow to prosecutorial pressure is a testament to her moral conviction in the movie, and perhaps in real life. (As a memoir of her illegal and underground activity, the veracity of her story is difficult to verify. For more on fact vs fiction in Molly’s Game, see these articles here and here.)

Molly’s Game is more than just an engaging movie with solid acting. Sorkin has put together a story that raises important issues about social values and constraints, the corruption of the criminal justice system through prosecutorial excess, and whether grace should be extended to people that make poor decisions.

For those interested in learning more about prosecutorial abuse and how it fuels mass incarceration, John Pfaff’s book Locked In: the True Cause of Mass Incarceration and How to Achieve Real Reform is a great place to start.

The Independent Institute also has a long history of publishing on research and analysis on criminal justice reform. A complete list of articles can be found here. The Pursuit of Justice, edited by Edward Lopez, is wide-ranging analysis of US legal institutions and how they have become bureaucratized and inefficient. A provocative article by David Skarbeck on Bolivia’s San Pedro Prison and reform can be found here. The role of privatization and prison reform is discussed in Prison Break: A New Approach to Public Cost and Safety by Erwin Blackstone and Simon Hakim.