Yale University professor William Nordhaus was named a co-recipient of this year’s Nobel (Memorial) Prize in Economic Science for his work on climate change. The award was of particular interest to me because back in 2009 I published an article in The Independent Review offering a thorough analysis and critique of his Dynamic Integrated Model of Climate and the Economy (DICE). At the Institute for Energy Research website, I have explained that Nordhaus’s latest version of his model does not support the United Nations’ current push for aggressive measures to limit global warming. In the present post, I will revisit my 2009 article to showcase three surprising facts about Nordhaus’s DICE model, all of which are very relevant for the climate change policy debate.

Surprise #1: Overly Aggressive Policies Are a Cure Worse Than the Disease

The most important table in my paper was taken directly from A Question of Balance: Weighing the Options of Global Warming Policies, Nordhaus’s 2008 book treatment of the 2007 version of his model. The table shows the costs and benefits of various policy goals for dealing with climate change: 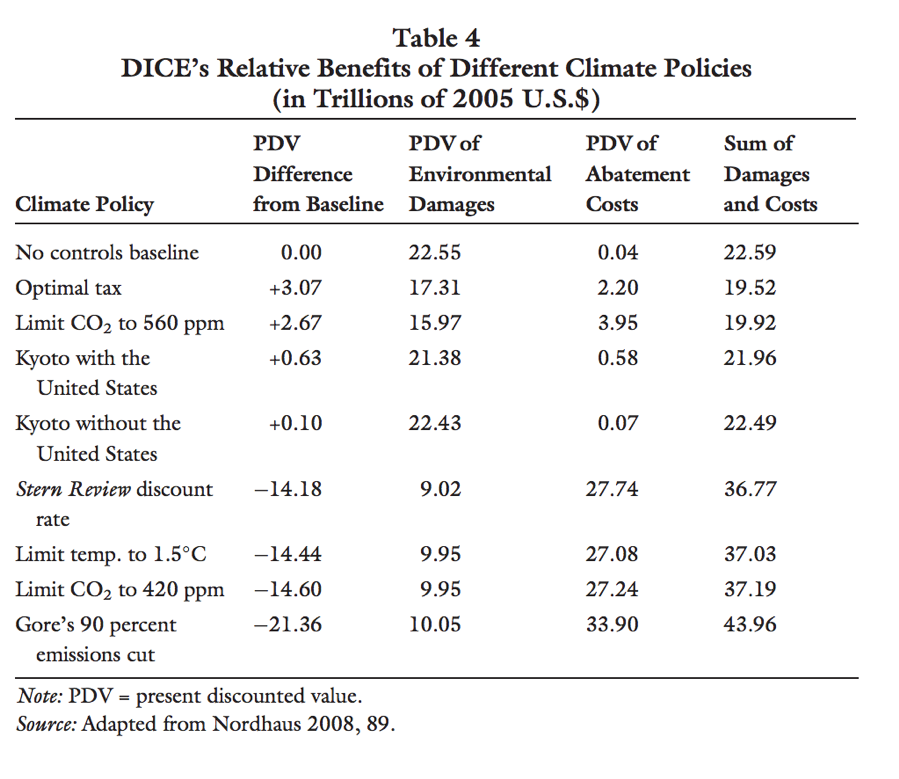 In Table 4 (reproduced from my paper), we see the costs and benefits from various climate policies, according to the 2007 calibration of Nordhaus’s DICE model.

For example, in the baseline case of no controls from the government, the long-run cost of environmental damages is estimated to be $22.55 trillion, expressed as a present-value sum (in 2005 dollars). However, Nordhaus’s baseline includes virtually no “abatement costs,” which measure the harm to the economy from complying with onerous climate regulations and emission taxes.

In the second scenario, Nordhaus shows the cost that his model yields when all the governments of the world implement a carbon tax at the optimal rate (which increases over time, although this isn’t shown in the table). Because greenhouse gas emissions are lower in this scenario, the present-value of environmental damages drops to $17.31 trillion.

Note that this estimate is $5.24 trillion lower than the estimated environmental damages in the baseline scenario. However, those gross benefits of the optimal carbon tax are not the actual net value of implementing the policy. Being a good economist, Nordhaus also acknowledges the cost of implementing his ideal carbon tax, in the form of forfeited economic output. As Table 4 indicates, the present value of the total abatement costs from Nordhaus’s optimal carbon tax is $2.2 trillion. Thus, the net benefits of the optimal carbon tax—relative to the “no controls baseline”—is only $3.07 trillion, shown in the first column of the table.

So, to sum up: In the world of the DICE model, as of its 2007 calibration, the theoretically optimal carbon tax made humanity about $3 trillion richer (in present-value terms) compared to a laissez-faire scenario, in which businesses and households emitted more than the socially optimal amount of carbon dioxide. Hence William Nordhaus in real life supported a carbon tax, because—done right—it had the ability to make humanity up to $3 trillion richer.

Yet notice something very interesting. Table 4 also shows the gross benefits and costs from other possible climate policies. And the worst shown alternatives—especially Al Gore’s proposal to cut emissions by 90 percent—would not only yield worse outcomes than “doing nothing” (i.e. the no-controls baseline), but the absolute value of the net harms would be several times larger than the net benefits of the optimal policy. For example, Gore’s recommendation would hurt conventional economic output so much that humanity would be $21 trillion poorer than under the baseline scenario. (This is a net figure, taking into account the large reduction in future climate change damages due to Gore’s aggressive limit on emissions.) Thus, Gore’s proposal would cause seven times as much net damage as the net benefits accruing from Nordhaus’s theoretical optimal policy.

Before moving on, consider in Table 4 the policy goal of “Limit temp. to 1.5°C.” This policy, although not as disastrous as Gore’s proposal, is still quite bad: It makes humanity $14 trillion poorer than doing nothing about climate change, and here again the net damages from this bad policy are more than four times the magnitude of the net benefits from the best possible policy.

Why am I focusing on this scenario? Astute readers will recognize that limiting global warming to 1.5°C is the UN’s latest announced goal, released on the same day as the announcement of Nordhaus’s Nobel Prize. Although I and other free-market analysts have pointed out the irony, the lion’s share of the media coverage treats Nordhaus’s award as complementary to the latest UN calls for drastic government intervention in the energy and transportation sectors.

(To be clear, Nordhaus’s more recent model calibrations are more pessimistic about the harms of climate change, and so the UN’s target wouldn’t be as ludicrous as it seemed in his 2007 model runs. However, as I explain at the Institute for Energy Research, it’s still the case that Nordhaus’s DICE model recommends far more warming than the UN’s preferred ceiling.)

It’s interesting to look back at Nordhaus’s estimates for the optimal carbon tax, based on his 2007 model runs and compare them to his most recent (2016) update. As I showed in Table 3 of my article, back then Nordhaus estimated the optimal tax in the year 2025 at $53.39 per ton of carbon (not carbon dioxide), measured in 2005 dollars.

However, before we compare the figure to his most recent estimate, we should make two adjustments. First, we need to convert the 2005 dollars to 2010 dollars, because the latter is what Nordhaus uses in his recent update. According to the Bureau of Labor Statistics CPI Inflation Calculator, the relevant figure in 2010 dollars should be $59.83.

Yet according to Nordhaus’s 2016 calibration, the optimal carbon tax in the year 2025 would be $44 per ton—meaning the estimate has almost tripled in under a decade.

Now to be sure, proponents of aggressive government intervention would exclaim, “You see?! We told you the situation was dire! The evolution of Nordhaus’s estimate shows that we need a stiff carbon tax right now.”

However, opponents of aggressive government intervention could review this history and respond, with just as much justification, “This is clearly a very fluid area full of speculation. If the recommended dosage of a certain dietary supplement almost tripled in nine years, many people would understandably conclude that medical science was still grappling with the issue, and would be less confident in heeding their doctor’s advice.”

Surprise #3: Most of Nordhaus’s Estimated Climate Change Damages Based on Ad Hoc Method

A final takeaway from my 2009 article revolves around its Table 2, which shows the sectoral breakdown of the impacts of a hypothetical 2.5°C warming. According to Nordhaus’s 2007 treatment, this level of warming would cause an expected 1.5 percent hit to global GDP.

However, upon closer inspection, we see that “catastrophic impacts” account for an expected hit to global GDP of 1.02 percent, which works out to 68 percent of the total damages. Now if this figure were derived in a systematic way, it would be one thing. However, as I explain in more detail in my article, it is quite surprising to see how Nordhaus (and his earlier co-author) actually came up with this number. Here’s how I summarized the situation:

Nordhaus in 1994 asked experts to estimate (among other things) the probability of global GDP loss of 25 percent in the event of 3.0°C warming…The surveyed experts gave him their answers, from which he computed the mean. By 1999, further research had made these scenarios seem more plausible or catastrophic. So, Nordhaus and Boyer took the original average of probabilities reported by the experts, doubled it, and then assigned this new figure as the probability for a 30 percent loss of GDP rather than the 25 percent the experts had been told to consider, for a less significant warming of 2.5°C rather than the 3.0°C mentioned in the original survey. (Murphy 2009, italics in original.)

And so we see the crude method by which Nordhaus derived his “expected value” of catastrophic impacts, which was computed by weighting the huge potential loss of 30 percent of global GDP according to the (low) probability of such an outcome occurring. As I indicate in the above block quotation, the numbers he plugged into this calculation were rather arbitrary, only loosely tied to what was even originally merely a survey of experts (as opposed to an actual analysis of concrete scenarios).

It is true that Nordhaus’ model and the other Integrated Assessment Models (IAMs) of the global economy and climate system have continued to improve over the years. Nonetheless, MIT’s Robert Pindyck—who is a proponent of carbon taxes—wrote a scathing peer-reviewed article in 2013 in which he dismissed these models as “close to useless.” Among their faults, the models gave policymakers a false sense of precision, because their damage functions were crude and arbitrary.

William Nordhaus is a pioneer in the economics of climate change, who arguably invented the discipline in its modern form. His so-called DICE model of the global economy and climate system is state-of-the-art, and was one of three selected by the Obama Administration to estimate the “social cost of carbon.” In recognition of his accomplishments, Nordhaus was one of this year’s Nobel laureates in economics.

Despite his prestige, Nordhaus’s model has serious shortcomings, as I documented in The Independent Review in 2009. Looking back, there are three surprising facts about Nordhaus’s model that are relevant to today’s policy debate:

First, Nordhaus shows that aggressive mitigation policies can be a cure worse than the disease, and he specifically included the United Nation’s latest goal in his examples of such misguided goals. Second, Nordhaus’s estimate of the optimal carbon tax (for the year 2025, for example) has almost tripled in less than a decade. Third, far from being tied to specific analyses of particular threats, Nordhaus’ global damage estimate was largely driven by a simple survey of experts, and this figure was furthermore manipulated arbitrarily by Nordhaus in light of new developments. The public would be very surprised to learn just how crude the “settled science” underlying various proposals to limit climate change really is.