What Melania Trump Should Not Do on Her Trip to Africa

First Lady Melania Trump leaves today on the four-nation trip to Africa—the first international trip alone without her husband. She will visit Ghana, Malawi, Kenya, and Egypt. Although she carries her own slogan, “Be Best,” she will be working closely with the United States Agency for International Development (USAID). At a reception at the U.S. Mission to the United Nations, she commended the agency’s work in Ghana to improve health care and nutrition. In Malawi, USAID has championed education as a means of fighting poverty, and in Kenya, its programs focus on early education, wildlife conservation, and HIV prevention.

There is a lot riding on her trip, not least of which is foreign aid. Africa’s economies—in particular, Nigeria and South Africa, the two largest—have been struggling with recession. In an August trip to Africa, Britain’s Prime Minister Theresa May pledged $5.1 billion for investment in Africa. A month later at a forum in Beijing, China made a counteroffer of $60 billion in aid and loans without any political conditions or strings attached. Speaking at the Beijing forum, Chinese President Xi Jinping disclosed the breakdown of the aid as follows: $15 billion in grants, interest-free loans and concessional loans, $20 billion in credit lines, $10 billion for “development financing” and $5 billion to buy imports from Africa. While many African leaders would expect her to commit U.S. funding, Melania Trump should avoid making any pledges of foreign aid.

There is much confusion about foreign aid, of which there are three types—humanitarian assistance, military aid, and official development assistance or ODA. Humanitarian assistance is offered to victims of natural calamities such as earthquakes, flooding, hurricanes, and so forth. Such aid is welcome and noble when an African country is struck by a natural disaster. Military aid to Africa has been the most useless and pernicious. More often than not, it has strengthened the hands of dictators against their own people. For example, in February 2011, during heydays of the Arab Spring in Egypt, the Hosni Mubarak government sent U.S.-supplied F-16 fighter jets to buzz protesters in an effort to intimidate and terrorize them. It did not work; Mubarak was ousted by the Supreme Council of the Armed Forces of Egypt led by Abdel al-Sisi, who rapidly promoted himself to field marshal, and subsequently became the president. The Egyptian military controls about half of the country’s economy.

Neither does Africa need official development assistance (ODA). More than $800 billion in Western aid has been pumped into Africa since 1960 with nothing to show for it except a multitude of black elephants, crumpled infrastructure, and shuttered factories. More pertinently, the aid resources that Africa desperately needs can be found in Africa itself. Each year, Africa receives about $44 billion in ODA from all sources, but according to the African Union, corruption alone cost Africa $148 billion a year. The choice of Ghana on the first lady’s itinerary is a prudent one because Ghana’s able president, Nana Akufo-Addo, has pledged to chart a development path beyond foreign aid.

Many African leaders will also expect Melania Trump to apologize for the crude and uncharitable insults her husband has hurled at Africa recently. He referred to Haiti and some African countries as “shit holes,” opined that Nigerians in the United States on visas would be loath to return to their “huts,” and suggested to Spain’s Foreign Minister that he build a wall across the Sahara to deal with Europe’s migration. Ms. Trump would be expected to offer a palliative to soothe emotions laid bare by such careless slights. But she shouldn’t be offering apologies for her husband’s intemperate remarks. It would never end and would crowd out her own agenda. Her presence in Africa alone is testament enough of her true feelings and goodwill toward Africa. Instead, she should use this trip to carve for herself a unique niche in U.S.-Africa relations. She should make her trip a celebration of the African woman, the least recognized and appreciated in the West and most shockingly, in Africa itself.

The African woman plays a role that is uniquely different from her Western counterpart. The African woman is the backbone of every traditional African economy. Because of sexual division of labor in traditional Africa, dangerous occupations—such as hunting, fishing, fighting wars, defending the village, among others—are reserved for men. Child rearing and the cultivation of food crops have always been the avocation of women. Women grow corn, tomatoes, onions, and other vegetables on small plots of land, measuring 3 to 5 acres. They still do today, providing the bulk of labor input in agriculture. The World Bank estimates that they provide anywhere from 60 percent to 80 percent of the labor force. The most challenging task for them has been harvesting farm produce and moving it from their farms to their homesteads. They often do so by carrying it on their heads. What can’t be carried is left to rot on the farms.

Back in the 1950s, there was no problem finding additional labor to help in this exercise. Their children and extended family members helped. So Africa not only fed itself but exported food as well. But the introduction of free primary education after independence and urbanization deprived the farmers of labor, creating shortages. Thus, one comes across inexplicable anomalies of food shortages in the urban areas while food is rotting on farms in the rural areas.

Traditionally, Africa’s women farmers have used what they grow on their farms to feed their families. They take what is left (food surpluses) to sell on free village markets. This has been the practice for centuries before the European colonialists stepped foot on the continent. It is still the practice today, which explains why market activity in most sub-African countries is dominated by women. Prices on traditional African markets have always been determined by bargaining; they are not fixed by African chiefs or village governments. Below is the typical market scene in Ghana. 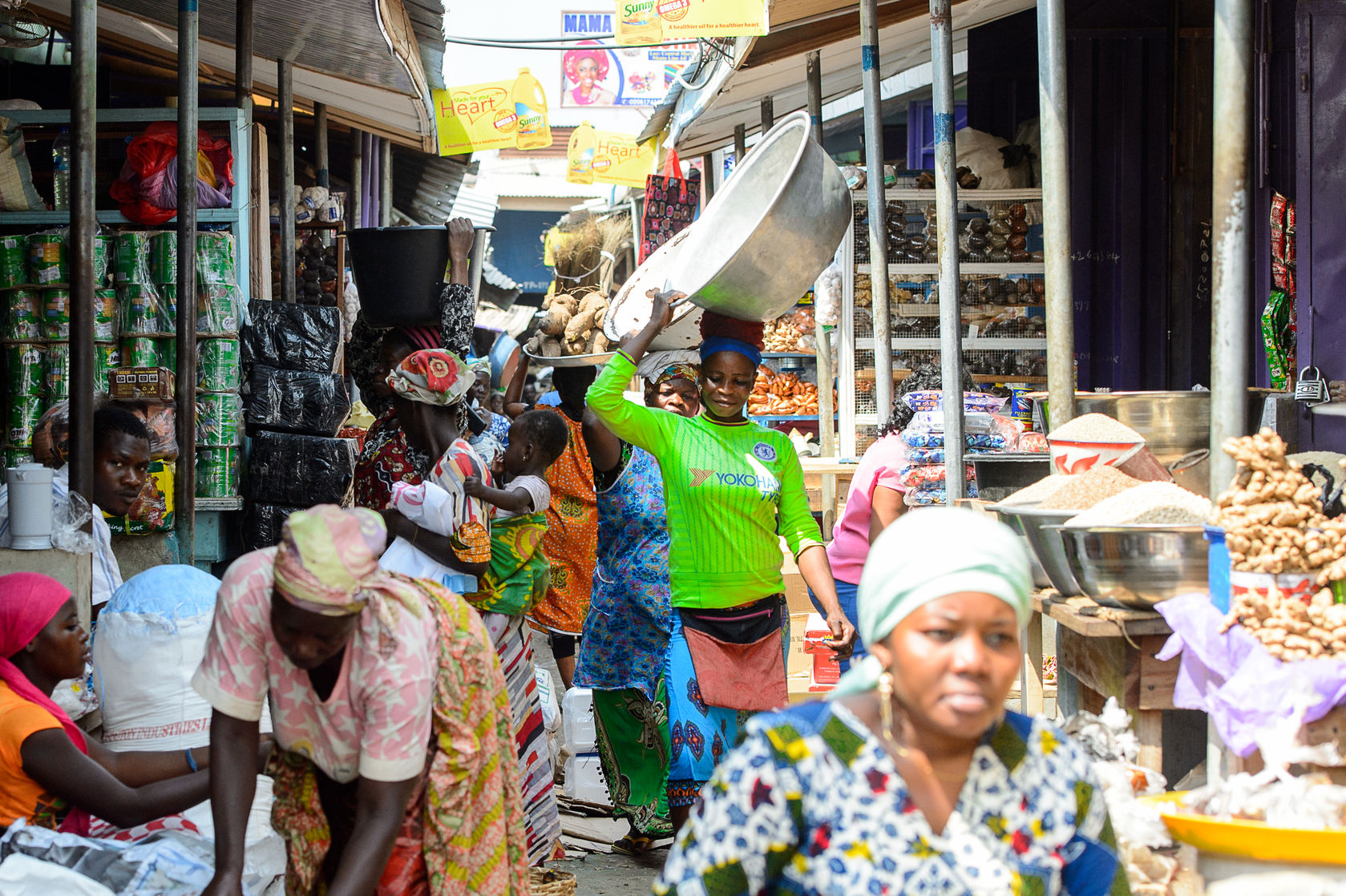 Nevertheless, the role played by the African woman in the economy has not been very much recognized and appreciated by modern African governments since independence in the 1960s. Nearly all of the postcolonial African leaders—from Kwame Nkrumah of Ghana to Nelson Mandela of South Africa—had mothers who were market women or traders. In fact, Africa’s market women and traders played an indispensable role in the struggle for independence. They used part of their profits from trading to finance that struggle. Yet in an act of monumental perfidy, many postcolonial leaders turned ideologically hostile towards markets. They adopted socialism/Marxism as their ideology. Markets were portrayed as Western institutions and slated for destruction. They did little to build upon the operations of traditional markets, which have been and have remained open-air affairs—crowded, filthy and unprotected from the elements. The ruling elites paid little attention to them and built supermarkets for themselves. In the early 1980s in Ghana, for example, stringent price controls were imposed on markets, and market women who violated them were whipped and their heads shaved. Markets were razed to the ground when traders refused to sell their goods at government-dictated prices. Recall that on traditional African markets, prices have always been determined by bargaining.

Neglect of peasant agriculture coupled with senseless civil wars—over 40 of them since 1960—which uprooted millions of people and turned them into refugees—most of whom were women and children—devastated Africa’s food production. Africa can’t feed itself today. It receives $44 billion in foreign aid and spends $35 billion a year to import food. That is, Africa relies on foreign aid to feed itself—all because the role of the African woman in the economy has never been fully appreciated by modern African governments.

Melania Trump can help change all of this by making an impromptu visit to an African market and purchasing some tomatoes to show the cameras. Most certainly, the one selling them would be a woman!

George Ayittey is a native of Ghana, president of the Free Africa Foundation, and a Senior Fellow at the Independent Institute. His forthcoming book lays out an alternate road to African prosperity.