Johns Hopkins University: Launching Pad for My Fifty Years as a Professional Economist 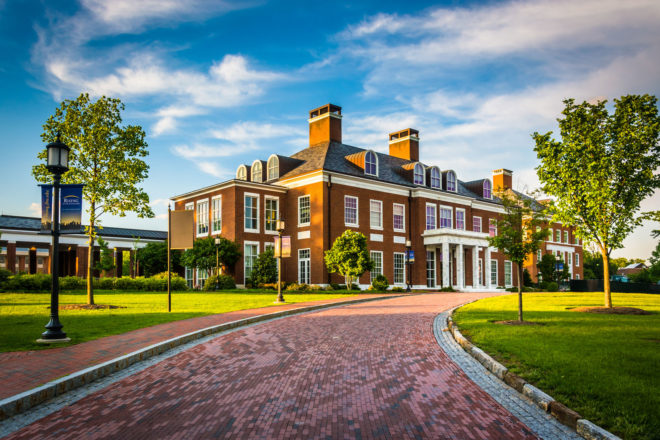 This month, I am celebrating—if that’s the right word—an especially important milestone in my life. In May 1968, exactly fifty years ago, I was putting the finishing touches on my work for the Ph.D. degree in economics at the Johns Hopkins University. Among other things, my dissertation had to be typed in the exact form prescribed for a copy to be deposited in the Hopkins library.

I also had to defend my dissertation before a committee that consisted of the two members of my oversight committee, H. Louis Stetler III and Edwin S. Mills; another member of the department of political economy (as the economics department was then called), G. Heberton Evans; and an outside member, who in my case was Alfred Chandler, an acclaimed business historian, among other things, from the history department. I received a passing evaluation in the defense despite Chandler’s asking me some questions I was totally unable to answer.

At that point, I had only to await the actual delivery of my diploma, which came the following month after I had evacuated Baltimore for the blessed relief of returning to the West Coast and reporting to my first academic faculty job at the University of Washington in Seattle.

I had spent only two academic years at Hopkins, and even though I had previously studied for one year in the fledgling economics Ph.D. program at the University of California at Santa Barbara, it was little short of a miracle that I managed to complete all the degree requirements at Hopkins as quickly as I did. I attribute this feat to divine intervention and to the fact that I had made such a nuisance of myself at Hopkins that the faculty was probably eager to get rid of me even if they had to hand me a degree to get me out of town.

I considered myself then, and have always considered myself since, out of my depth at Hopkins, which in those days was ranked among the top 20 economics departments in the country. About half of the students were graduates of foreign universities, and the American students were all graduates of highly regarded U.S. colleges. Most of my fellow students had been math majors, which put them in a good position to succeed in the highly technical Hopkins training. Although I had come just two or three courses short of qualifying for a double major in economics and statistics at (comparatively humble) San Francisco State College, I was by no means a math whiz, and the highly mathematical nature of the education I received in the grad program at Hopkins posed a great challenge for me. That I was able to make it through the theory courses I attribute in large part to the patience and understanding of my teachers, who were willing to accept merely substantive demonstrations of my understanding in many cases in lieu of my spinning out the mathematical proofs that my fellow students produced.

Hopkins was a wonderful place to be a grad student in those days. There were only about 35 Ph.D. students in the graduate program, all years combined, and a single oddball M.A. student. (How he got there no one seemed to know.) There were 10 or 11 faculty members (including Bela Belassa, who taught at the Washington, D.C., campus), so the faculty/student ratio was very high. Because I was the only student in the program interested in specializing in economic history, I had in effect a personal faculty member, Stettler, a really sharp and generous assistant professor, in whose office I could be found on most afternoons camping out and discussing economic history, which in those days was in the exciting early stages of the Cliometric Revolution, a development into which I leaped with great interest and zeal. I was also able to work as Stettler’s research assistant in the summer of 1967, collecting data at the venerable Peabody Library in downtown Baltimore. Later, in 1970, he and I managed to place an article based on this research in a respectable history journal, The William and Mary Quarterly.

The focus of a Hopkins graduate education in those days was the weekly department seminar, which the entire faculty and all the grad students were required to attend. This had been established earlier by Fritz Machlup, a Hopkins prof (who had left before I arrived) and an Austrian native who had participated in the famous Mises Kreis in Vienna before the Nazi menace prompted Ludwig von Mises to relocate to Geneva in 1934. The seminar presenter might be a Hopkins faculty member or a Ph.D. student (for whom presentation of a seminar was a requirement for the degree) but usually was an outside economist. Presenters normally delivered a paper ahead of the seminar and had only ten minutes to make introductory remarks before the discussion began. Two Hopkins grad students were always the formal discussants and spoke first. The floor was then opened for grad students to speak, and only when they had exhausted their desire to speak were faculty members permitted to speak. The seminar ran for two hours or, as we said, until the canary died. The bird never kicked the bucket, but the poor thing came dreadfully close on a few occasions when an especially uninteresting or bad paper was the topic.

The seminar gave each of us the opportunity to learn from each faculty member, to see how each of them approached problems, to be exposed to ideas that we might otherwise never have encountered in our courses. For example, I never took a course from the famous Hopkins econometrician Carl Christ, but I learned a lot from him in the seminars. He evidently saw something in me there, too, because when I went on the job market late in 1967 Carl took it upon himself, without my asking, to write letters recommending me to people he knew in some of the country’s top departments. As a result, I was invited to visit for job interviews such elevated places as Princeton, MIT, and the University of Chicago, among others.

Although after leaving Hopkins and starting my career at Washington I began to drift away from the type of training I had received at Hopkins, I was always grateful for the opportunity to have earned my doctorate there. Doing so got my career off to an excellent start because it helped me to receive the job offer from Washington, where the economic history program was then one of the best in the world. I was, therefore, able to advance my knowledge and understanding of economics and history at a rapid rate during my fifteen years as a faculty member there (in 1983 I resigned as a tenured full professor and went elsewhere).

The fifty years that have ensued since I completed my doctoral work at Hopkins have been the occasion for many changes in my knowledge, interests, outlooks, and aspirations. I have taught at several institutions as either a member of the regular faculty or a visiting professor or lecturer. Since 1994 I have been Senior Fellow in Political Economy for the Independent Institute, and for seventeen years I was the editor of the institute’s quarterly journal The Independent Review. I have traveled widely in many countries for professional activities. I have worked as a consultant or expert witness in a variety of areas, ranging from government regulation of the Pacific fisheries to some large Superfund cases in the federal courts. I have lectured for dozens of organizations and had opportunities to express my professional views in many media outlets. Of course, I have also done a great deal of research and writing along the way, producing a number of articles and books for both professional and lay audiences.

But it all began at Hopkins. My two rather distressing academic years in Baltimore, from the fall of 1966 through the spring of 1968—perhaps the worst such period in the city’s history—served as my jumping off time as a professional economist. I shall always be grateful to the faculty there who took a chance on a young man from a third-rate school and tolerated him so graciously during the time he spent with them. I am therefore happy to pay homage to my teachers at Hopkins—Jurg Niehans, Peter Newman, Ed Mills, Carl Christ, Heb Evans, Bill Poole, Bill Oakland, and Lou Stettler—and, before them, at UCSB, Phil Sorensen and Amor Gosfield, in particular, who were encouraging and supportive even as I was jumping ship.

Robert Higgs is Senior Fellow in Political Economy for the Independent Institute and Editor at Large of the Institute’s quarterly journal The Independent Review. Higgs is also the author of the book, Taking a Stand: Reflections on Life, Liberty, and the Economy.