Washington, DC: Where Torture Is More Forgivable than Harassment 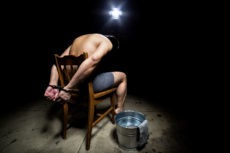 Less than a month ago, President Trump’s nominee for the VA head chose to withdraw his name from consideration as allegations mounted—which he vehemently denied—of his having created a “toxic” work environment and assorted other peccadillos. Meanwhile, most of us have lost count of how many members of Congress have resigned due to allegations of sexual harassment of various degrees, some proven, some not, including, for example, Al Franken, who issued this mea culpa:

Yet the Senate now stands poised to confirm the nomination of Gina Haspel as CIA Director. Ms. Haspel has been accused, not by one or two individuals, but by more than 100 military generals and admirals, of directly overseeing torture, and subsequently covering it up and destroying evidence.

And to what do Senators who had earlier expressed opposition to her appointment now attribute their change of heart? Well, it seems she has changed her mind about torture:

Sen. Mark Warner of Virginia, the top Democrat on the Senate Intelligence Committee and an influential voice on national security, announced Tuesday he would back Gina Haspel. He cited a new letter in which she said that the agency shouldn’t have undertaken a post-9/11 antiterrorism program that many critics say amounted to torture.—”Gina Haspel Wins Key Democrat’s Backing, Paving Way to CIA Confirmation“

With the benefit of hindsight and my experience as a senior agency leader, the enhanced interrogation program is not one the CIA should have undertaken. The United States must be an example to the rest of the world, and I support that.

Notice that she makes no mention of her role nor makes any apology for it.

It’s hard to avoid drawing the lesson that for career success in DC, small sins are for chumps, while torture, killing of innocents, and mass surveillance garner the big rewards.

Are we ready to withhold our consent to be governed by these moral bankrupts yet?

The Senate has now confirmed 54-45 that Deep State abuses, domestic and foreign, will continue to be encouraged and rewarded: all hail CIA Torturer-in-Chief Gina Haspel.

Mary L. G. Theroux is Senior Vice President of the Independent Institute. Having received her A.B. in economics from Stanford University, she is Managing Director of Lightning Ventures, L.P., a San Francisco Bay Area investment firm, former Chairman of the Board of Advisors for the Salvation Army of both San Francisco and Alameda County, and Vice President of the C.S. Lewis Society of California.
Full Biography
Posts by Mary Theroux
Comments
Before posting, please read our Comment Policy.