Some Thoughts on Arming Teachers 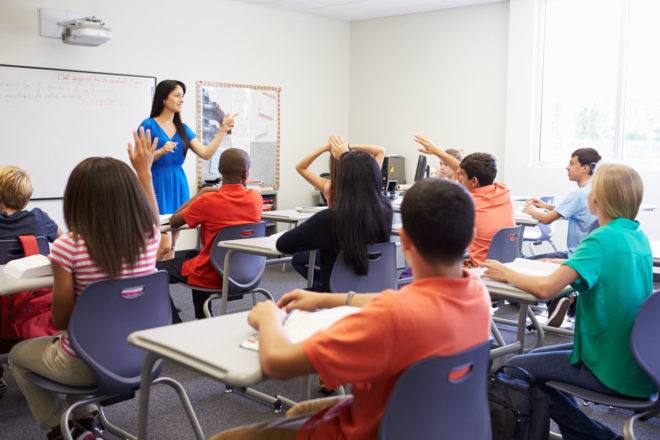 Since the tragic Valentine’s Day mass shooting at Douglas High School in Parkland, Florida, a number of proposals have been made for arming teachers as a way to prevent future tragedies like this. Could they be effective?

Some recent ideas would make armed teachers first responders who could confront and perhaps neutralize a school shooter. Some proposals would require teachers to take firearms training to be certified as qualified to use firearms at school. Sometimes teachers would retain possession of those firearms; other proposals would lock them in a box that would be accessible to certified teachers in the event they were needed.

There are many issues that might be raised regarding the details of the various proposals, but they all have two serious drawbacks. First, they assume that teachers would be competent responders who would be able to neutralize a school shooter. Second, they shift teachers’ roles from protecting themselves and those around them to seeking out and confronting someone who is a serious threat.

Teachers are not law enforcement officers, and as civilians under attack, they should not be expected to confront a shooter, and would almost surely be ineffective if they tried.

Expert advice on how to react to an active shooter is first, to run. If that is not possible, hide. If that is not possible, fight. As people who are not law enforcement officers, this should be the instructions we give to our teachers. They are not qualified to confront an active shooter, even if they receive additional training. They are civilians, not law enforcement officers.

Would these proposals to arm teachers have any effect? To the extent that the answer is yes, it is because someone considering a shooting like this might be deterred by the thought of meeting armed resistance. They might think twice about pursuing an attack in a location where they know some people would be armed, rather than attacking in a gun-free zone.

That points directly toward eliminating gun-free zones and allowing anybody who has a concealed carry permit to bring a concealed handgun to school. Many teachers would be likely to do so, but a potential school shooter would not know how many, or who they are.

Removing the gun-free designation from schools would allow armed teachers. Because people must be 21 to obtain a permit, K-12 students would not be allowed to be armed. This would provide the deterrent effect of making potential school shooters aware that they might meet with armed resistance, with the uncertainty that they would not know how many people are armed or who they are.

Proposals such as providing more training to armed teachers so they could confront a shooter, or locating firearms in locked boxes accessible to trained teachers, amounts to hoping that teachers, whose main job is teaching, will be more effective responders than the law enforcement officers who were on-site at the Parkland shooting, and whose job it is to confront the bad guys. That is wishful thinking.

If the gun-free designation is removed from schools, it would still be sensible to advise teachers to first run, and if not possible, hide, and if not possible, only then fight. But they would be in a better position to fight an armed assailant if they also were armed. Teachers are not law enforcement officers, and we shouldn’t hope that they could act as if they are in situations that are still, thankfully, very rare.

The big advantage to arming teachers would be that potential school shooters might be deterred by the thought that there would be some armed individuals who could not be identified ahead of time, and who might confront them. This can be accomplished simply by removing the gun-free zone designation from schools. Expecting more from people whose main job is teaching is unrealistic.